Well, damn.  Last Monday one of my best friends died. His name is BobShaw and he 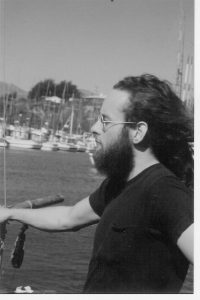 would have turned 66 today, the 10th of June, 2016. BobShaw was one of those fine characters that inhabited East West Musical Instruments Company in San Francisco in the late 60s and early 70s. It was the best place to be and the very best time to be in such a best place. It was ‘Once Upon A Time”….It was great!  Times were turbulent…the country was changing……and yet.  Here in our crazy little Factory it was an adventure every day.  We made leather clothing, and they were spectacular clothes designed by our leader, one Mr. Norman Stubbs, but there was another kind of magic there.  Seems like everyone who wasn’t nailed in place somewhere else rolled on down to the coast and some of the best of the un-nailed landed at Norman’s.  Some of us knew from the very beginning that we had found ourselves in a spot that would stay with us forever…BobShaw was one of those who knew.  His place was that of the mad inventor of things that sorted, oiled, dyed, etc., the fixer of sewing machines…someone who was building a sailboat in his basement (it’s still there)…a person it seemed intent on my physical danger as he used me to test his inventions at times…(picture Beaker on the Muppets)…I made it out alive….Shaw just didn’t make it this time.  Personally, he was my astrology partner, my fellow explorer of the ‘out there’.  To the rest of the East West gang, he held a huge spot.  We’re getting older now, and many have gone on…’East West and Beyond’. We may be reaching that tipping point.  That place where when you mention a name like BobShaw there are not so many that know the story.  It’s a place where the thoughts of seeing old friends has more to do with nostalgia than anticipation.  Shaw knew he had a special and unique part in the play that was East West.  He was never embarrassed to love those times…and people.  Me neither.  Now, instead of rolling to the coast, we seem to be rolling off the tabletop, one by one…off this mortal plane.  Hey BobShaw, see if you can find something that needs fixing wherever you find yourself now.  You were a very, very good friend and I shall I miss you.  Damn.