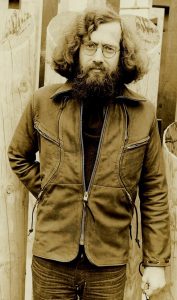 In 1969, I had my first adventures in San Francisco. Leaving my bags in a locker at the airport bus-service terminal, I walked up Nob Hill, stopping in stores to call old friends who might put me up for a couple days. I decided to try an old college acquaintance who lived on Russian Hill, which seemed fairly close by.

The hill was steeper and a lot higher than it had looked from Geary Street, I walked up Leavenworth towards Union and the views of the city, and the bay, and the bridges got better, more impressive. But I couldn’t get used to the sight of people sitting on sidewalks, something that no one in N.Y. (or anyplace else I had lived) would do. Sidewalks in New York were where people spit, and where dogs and birds defecate. But these youngsters were almost certainly teenage runaways, they had their own rules.

My friend on Russian Hill had a beautiful flat, but it was already full of “crashers”—a scene left over from the “summer of love” in 1967. Someone suggested I ask Larry Fritzlan, who had a large flat and welcomed guests. I called him up, he said “Come on over, I got lots of room.” Larry was a terrific host, and let me have his front room, on the highest block of Church Street. He and his wife, Ellen, had no other guests at that time, but over the next few months, a parade of crashers came and went. Some, like myself stayed for weeks. That was the atmosphere in San Francisco when East West began.

The onset of my on-and-off career with East West Musical Instruments Company was in the Spring of 1971. I had heard about the place from Larry more than a year earlier. I found that Ellen, Larry’s former wife, who I had always liked (and who had always been friendly to me), was now secretary of the firm. I decided to go down to 8th and Folsom Streets, to see if I could find a place there.  I can’t remember what happened after talking to Ellen in the office, but that same day I found myself operating a very strange, dangerous-looking old machine that I learned was called a “clicker.”