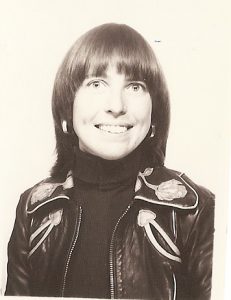 I got my BA in Art from Cal, Berkeley 50 years ago.  Then I spent a year in the grad Art

program at SFSU.  There I won a prize for my soft sculpture.  I bailed and decided to try some artsy projects on my own.  So in the fall of 1968 I got a lease on a former pet shop at 579 Castro Street and opened Apostrophe S Gallery.  Along with my own painting and soft sculpture, I featured a large offering of handmade postcards that a friend Kathy Clifton from my days at Cal and I made at her apartment while listening to Dylan in the evenings.  Later I featured work by grad students from various schools in the area.  One opening featured a flamenco guitarist and his dancer/girlfriend who I had offered the gallery to at nights for practice.  Ruth Asawa, who lived further out Castro Street visited and encouraged me.

I lived in the back of the retail space which has been Anchor Oyster Bar since 1978.  This arrangement had many inconveniences primary among them the lack of a complete bathroom and no kitchen.  Luckily I made friends with a lot of folks in the neighborhood.  Soon I began going to the apartment at 4105 19th Street at Castro to bathe and share in preparing meals with the lively group of young people living there.  A new roommate moved into that apartment after I’d been hanging out for several months.  His name was Tom Hobson.  He and I became a couple and I spent fewer nights in the back of the gallery.  When the year’s lease was nearing its end, I decided to close the gallery because it was hard to sell enough art to cover costs.

I noticed a new business opening directly across the street.  When I realized it was a garment factory I talked with Norman Stubbs about a job.  He asked me how I was with spatial configurations.  I said that I had a good ability to see how to fit shapes into a tight space.  I had sewn and made my own designs for both clothes and sculpture.  He told me that I could have a job as a cutter.  I was shown how to trace around the patterns on the opposite side from the one that would be the outer (smooth or suede) with a marker pen.  The goal was to avoid all scars, holes or other imperfections on the reverse side while doing the layout.  It was also necessary to allow enough space between each piece for the seam.  Then we used scissors to cut out all the pieces, wrap them into a bundle with the order card and from there they went to the sewers to assemble.  In the early days everything was cut by hand since East West had no hydraulic clickers and stamps to mechanically cut small pieces like under-sides of collars, front plackets and inside pockets.

I think there were two other cutters when I joined the crew.  At first I didn’t get to know anybody but them because it took so much concentration to do a good job and not waste leather.  As I got more comfortable with the job I became aware that a number of my fellow workers had recently come to San Francisco.  Being a native, I equally enjoyed the scene, but was more integrated into the city and had many friends from other areas of my life besides work.

Tom Hobson, with whom I lived was a close friend with many of the members of the San Francisco bands.  We went to the Avalon, the Carousel, Fillmore and Winterland as often as two or three times a week and frequently were invited back stage.  Many of these musicians played informally with Tom and some came frequently to jam in our apartment on nights when they weren’t gigging.  Cutting coats for the name musicians of the day seemed like a natural extension of life in San Francisco.

After Tom and I married, his two sons moved in with us.  I continued to work at East West for a while but decided that I needed to do more as a step-mother, so I stopped working there for about a year or year and a half.  I came back when Tom and I separated.  The factory had moved to Folsom Street.  One day while hitch-hiking to work I was picked up by Jim Marshall who said he was on his way to the Wally Heider Studio to photograph some musicians at a recording session.  Tom and Jorma Kaukonen were doing a record there and it turned out they were the ones Jim was going to photograph.  Small world!

I remember that on my first day back at East West  in the new to me Folsom Street factory I was offered a joint and took some deep pulls on it.  Then I realized that I was pretty stoned.  Cutting that first garment took forever!  I sure didn’t make much money that day.

At Folsom Street I found a much expanded operation on three floors.  However there may only have been one more cutter than when I left Castro Street for all the sewers that now were assembling the vastly enlarged catalogue of current designs.  Now there were several hydraulic clickers to cut fringe, unseen pieces, thongs, etc.  I can’t recall when the patterns began to include the seam width but when that happened it facilitated easier layouts on a hide.  Some of the longer jackets required two hides and matching the dye lot was essential.  I developed pretty good upper body strength from hauling burlap sacks of hides from the storage area to where we were working and lifting part of the stack in search of the optimal hide to make a beautiful garment.

When the factory made its final move to Third Street, there was a big revolution in the cutting department.  Bob Shaw built each of us a custom table that had a cutting board inlaid.  We switched to using knives and had patterns made from Masonite around which we could run our knives swiftly, assuming that we kept our knives sharpened on the Arkansas and wet stones.  I helped make these Masonite pattern pieces tracing around the sized paper pattern pieces with a marker then running them through a recycled meat band saw.  We finished each piece by sanding the edges and punching a hole in them so that all parts of one design, in one size could be hung together awaiting use.  This was an enjoyable project before the new orders were written up and the factory was back in production.  We got covered in saw dust, but it felt great to run a dangerous machine and get the job done right.

The cutters were given the day’s stack of orders and the three or four of us would take turns picking cards, starting with the easiest and ending with the tricky ones.  We were always paid piecework by the garment completed, so there was a lively competition for the simpler ones.  I was always the only woman cutter and we signed the order cards we had completed.  As a joke, I signed mine “Fred” and used a silly rubber stamp to complete my orders.  At Third Street the cutters faced the sewers and I liked that because there was more direct sociability and feedback if there were any problems.  I guess I made a lot more friends in those last years because most of the garment production was all on one big floor with abundant skylights overhead.  On cloudy and rainy days when it was darker than optimal, someone was bound to play the Beatles “Here Comes The Sun”.

At Third Street some enterprising craftspeople who made very nice silver and lapidary jewelry began showing up on payday.  Some of us were tempted more than others.  I know I bought two or three rings from them.  I bet they wish they’d be able to trade leather garments for jewelry.

Between completion of orders generated at one trade show and the next new line being ready to show, all the production team was laid off.  When the factory was on Third Street it couldn’t have been easier to file our unemployment claims – the EDD was on the same block as we were.  And the other big bonus in those days was that the Unemployment Department could only require you to see work in your designated skill.  When East West was on lay-off all the other leather houses were as well.  That meant guaranteed free-time for us.  Frequently the money I’d saved up financed a nice little trip somewhere.  I’m sure that was the case for many of my fellow workers.  Those were the days!

In 1975 my newish boyfriend Greg Helser suggested that I accompany him on a trip to the Yucatan.  It wasn’t a natural lay-off period at East West but I wanted to go.  I recruited Greg Underwood who had formerly been a cutter and was now doing carpentry to fill in for me for what we expected to be around two weeks.  Greg U drove a hard bargain, but I agreed.  We got a ride with an older gentleman who was driving all the way to Panama.  When we got near where we were to part ways he said “I think you two would really love Guatemala.  Why don’t you keep going with me to Guatemala City?”  So we did.  Then we took buses around the country, even all the way to Tikal in a 2nd class bus where we slept in hammocks in a grass shack.  We found a guy in Antigua, Guat. Who was looking for someone to share driving and costs with him on his return to L.A.  We jumped at the opportunity.  We returned not by the shortest route, by the most scenic.  In Vera Cruz I sent Greg U a telegram saying I’d be another 10 days, so hold down the fort.  He did and I was so grateful for the wonderful trip and Greg Underwood being so flexible.

East West had branched out into producing Western shirts.  Norman was doing a site inspection of that faciilitywhen his ponytail became caught in the gears that unrolled the layers of fabric to be cut.  He told us he refused to let them cut his hair and stayed crouched over until they could untangle it all from the machinery.  I’ve never forgotten that.

In 1976 I had traumatic leg injury when a car turned abruptly in front of my bicycle as I was flying down Bernal Heights.  I became a bionic woman with a huge metal rod replaced my shattered femur.  It took several months before I could return to work.

After that It seemed that Norman was only there for the occasional meeting.  Things were winding down and we were hearing that some work was being done in Asia.  Ultimately we learned that the factory and East West as we’d known it was closing.  It was sad, but I think most of us knew it was coming and had other plans in the pipeline.  I enjoyed the work, the camaraderie and the terrific record collection that was the accompaniment to our days there.  Like everyone else, I had a few jackets and even some leather pants that I wore with pride.  Too bad I parted with them so cavalierly.

Thanks Norman for a great run.