How I Got To East West 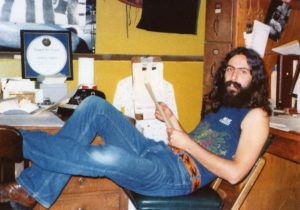 I first got to San Francisco, in February of 1968. There was this funky apartment building.  No one had much money and we all shared places to cover the rent. Eventually I shared the flat with two other guys. One was David and the other, Bobby Schneider. Bobby, the original wild man. Bobby, the production manager at the Castro Street shop. Bobby told me that EW was opening a larger facility on Folsom and would need a guy to do shipping. I should come and meet Norman.

After work that day, I went to Castro. The first time I’d seen the shop. Filled with beautiful hippies, I fell in love with the whole scene. Bobby took me into the back to meet Norman. The interview was a success and I started the next week on Folsom Street.

But what is a week? Norman, as might be expected, had an alternate way to schedule the work week. We worked four days in a row and then had two days off. So our work week did not flow in sequence to the Monday to Friday system of the rest of the Western World. Rather it was a separate disc spinning in tandem with the M-F disc; overlapping but with different starting and ending points. The word Monday, or whatever, had no meaning in our work-a-day world it was only a reference point to something else. You might work Thursday, Friday, Saturday, Sunday, and then have Monday and Tuesday as your weekend. It was just another way that we were freed in those late Sixties years. We lived a time of loosening knots, and I, for one, loved it.

So, I wandered over to Folsom to check out the place. Nothing was happening there yet and I made my way up to the second floor where we were soon to build the shipping room. All of a sudden I was confronted by Logan, who wanted to know what I was doing there. The guy was actually in my face as I explained who I was and what I was doing there. He was still skeptical, but Bob Shaw showed up and smoothed his feathers. After he and I got to know each other, we decided that we would be great friends.

The shipping room was on the north wall of the building and stretched about a third of the way along the second floor. We built a wall with windows from table height to the ceiling. From the outside, it looked like a freight train. There was a door at each end and a small alcove with a phone and a little desk for writing.

Along the window wall Bob and I built a continuous table for sorting and packing the coats and pants. Typical plywood and two by four construction. There was a scale, a packing tape machine, UPS labels, PO labels, lots of boxes.

On the back wall were the shelves. Each garment was made to order and had a file card that followed it around through the production process. The file card was written by whoever in the office took the original order. On it was written the name of the store, the name of the garment, size, color, and any special instructions – usually about sizing or the name of a person if it was a custom order. I used these cards to sort the garments into piles for shipping.

But we need to talk about the shelves. Simple pine shelves, also the length of the shipping room. Each section was eight feet wide and eight feet high. Norman was concerned about break-ins and theft. So, our Mister Shaw designed a lifting door system. We hinged two sheets of ¾” plywood together and hung them from the top of the shelves. Every day when I would open up, I had to unlock the padlock at the base. Then lift the lower sheet up so that it mated with the upper sheet. At that point I attached this rope to a hook and lifted both sheets to the ceiling. This fully exposed the shelves. The plywood was held up in the air by some wood hook of Shaw’s devising. I was terrified standing under those sheets, but somehow they never came down. There were probably four sets of these things to raise and then lower at the end of each day. That was my daily workout.

We shipped by the Post Office and by UPS. UPS would come at the end of each day and ring a bell for the freight elevator. I would have all the sealed and labeled boxes stacked on the elevator and would ride down to sign the guy’s book.

The Post Office was a whole ‘nother story. I would load the boxes for the PO onto the freight elevator and take them with a hand truck to our VW van that was parked in the alley. Drive to the PO, park somehow, load the boxes onto the hand truck and wheel into the PO to stand in line for mailing. Most of the time, it was pretty straightforward. Lift each box onto the scale for weighing. Get the bill. Can’t be sure, but I must have written a check for the mailing charges.

But some days when the lines were long, some manager would take a look at the longhaired hippie standing there and would close that window and send his guy on break. Just to screw with me. And I would have to get on another line. Perseverance Furthers it says in the I Ching, but that would piss me off.

When I first came to EW, Guy Fritzlan was the Sales Manager. He was an introverted and spiritual guy. He had been in the navy and his time on the ocean at night affected his worldview. He spoke about the glow from the phosphorescent creatures that lit up the sea. He was funny and self-effacing and it was good to know him.

At that time, Norman still was living in San Francisco. So he was in the office most every day. We had four desks in the office. Norman’s, mine, Ellen’s and the fourth desk was revolving. The person who purchased and controlled all the parts and pieces sat there. For a while it was Mike Rizor and then for a bit it was Nancy until the cancer made it impossible for her to work any more.

So, the organization of the leather clothes part of our company really started with the production manager. It was Bobby, then Logan, then Bill Oetinger, and then Roger Case. After that I was gone and lost track.

The essence of our business was the clothes. The patterns were made in collaboration with Sandy and Norman. The production manager oversaw the cutting; hides were chosen and the cutters traced the pattern onto the leather. If any changes were to be made, such as an enlarged sleeve hole, for instance, it was done at this stage. The coats or pants were rolled up with their order card and sent upstairs to be sewed. People like Klaudia worked with the gluing and sewing people to put the coats together and then the finished garments were sent to the shipping room to go to the stores that had ordered them.

Four times a year, a group of us went to NY for the clothing shows. We brought our whole line of new and old garments. The shows were held in Midtown NY hotels. Floors and floors of displays.  We lined the walls of the hotel room with leather hides and then hung the coats and pants in front of the wall coverings. Because Norman’s designs were so incredible, we were mobbed for all three (?) days of the show. All of us were walking around with clipboards and order forms, taking orders from our regular customers and from new store owners who wanted to sell our line. It was heady and profitable.

We returned to the city and I spent the next day of two writing individual cards for each garment. This was all given to the production manager on the floor, and the production process began.

The members of the staff started primarily with Ellen. She was the bookkeeper and financial control. But she was so much more. Her heart and her professionalism combined in this wonderful hippie chick. I loved her, as did so many of us. Among other things she taught me how to type. Ellen came out from the Midwest with her husband Larry. They split up pretty soon. But Ellen worked in the factory and Larry ran the store on Grant Street that was an outlet for East West clothing. Larry was also a professional photographer and it was he that took all the photos for the catalogs. It was all 35 mm film in Larry’s Nikon.

Bob Shaw was the builder and fixer. He was all over our plant creating the physical environment and keeping it running.

Norman had drawn a mandala that completely indicated the interrelationships of all the parts of the business. It was a series of concentric circles and each level was interrelated. In color, Norman had put a lot of thought and skill into its creation. I used to study this seemingly simple masterpiece. It would be great to see that again. Later the mandala served a business purpose.

At the time East West sold only on a COD basis. And that worked for a few years while the company was growing. But the clothing shows and our reputation brought EW to the attention of larger retailers. And those retailers could not operate on a cash basis. These stores approached us to start selling on a credit basis. And Norman was loath to do this. It meant jumping into a different kind of risk. There was already enough risk in purchasing the raw materials, in maintaining the physical plant, and in the daily overhead of all the workers. For a while selling on credit was a bridge too far.

But more and more Norman began to consider ways to effect this and thereby to continue the growth of the company. Eventually he found out about “factor services”. These were companies that would buy our receivables and pay us after they took a percentage. Norman started interviewing prospective factors at our office.

One day a gentleman came to meet with Norman about working with us. Norman was a little late in showing up, and the guy sat at Norman’s desk. In a few minutes he saw the mandala pinned to the wall. I wondered what this suit was going to think about this far out business representation. And the guy started exclaiming how good it was, how much sense it made. I remember him saying that the more he looked at it the better it seemed. I was impressed with him. Soon Norman showed up and took the prospect on a tour of the factory. If memory serves, this is the company we went with.

Those were the early days of the growth of EW. I haven’t talked about Hard Leather, about David Warren or Steve Rebuck; we haven’t talked about the blue jeans, or the later iterations after the move to Third Street. There is still the story of the purchase of the land on Maui. It’s quite a saga.

By many accounts, the Folsom time was the golden era of EW. We were in transition between being a storefront business to a much larger entity. Norman was gaining a reputation as a legendary designer, about which we only had a glimpse at the time.

But I think the thing that is most telling, are the connections we made and the warm memories that live in us and enable us to tell this story.