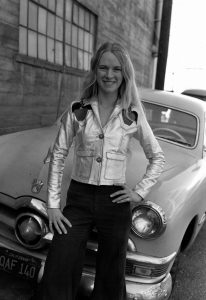 It was 1970 and I was 19 going on 20.  I was crashing at Landy’s which was cool because she was a long time friend.  We needed some “bread” (money) so Landy suggested we walk over to this little hippie leather shop down the street and apply for jobs.

Ted, a tall lanky wonderful dude, was managing the retail store at East West on Castro Street at the time. I also vaguely remember Larry Fritzlan being there that day when we arrived; Larry with his trusty camera, but that may have come after I started working at East West.  At the time, he lived on Church Street around 20th, and Bob Shaw lived in the flat below (or above) with some old-school beatnik communist guy who was always smoking cigarettes and pecking away subversively at his typewriter. Larry was a cab driver, but often at Castro. The official EW photographer. He was also doing some rock photography. I have, buried somewhere, a photo of Mick Jagger (Oakland Coliseum show?), and one of Brian Jones at the Monterey Pop Festival. I am getting a little ahead of my story, so hold on. I am sure you will hear more about Larry and Bob Shaw later.

I had very little retail experience…. a year or less working at Paraphernalia in Ghirardelli Square and a few months of working at Takahashi import store right next to G. Sq.  I really truly was a lousy sales person. But Ted hired me anyway. Landy didn’t get hired, but she was groovy with that. I don’t recall interviewing with Norman or anyone else though I may have done so. I didn’t interact much with the sewing crew, except for the daily backyard weed breaks (it was always so sunny and warm back there, and getting high was just so… iconically San Francisco, dreamy and flowery-like).

I vividly remember Ellen in her little loft office perched above the sewing area. Always so friendly. And the sweetest guy named Andy, (curly blond hair, Italian) who played guitar quite well. There was Guy Fritzlan, Gary, Sarah, Klaudia and that crazy wild guy with crazy wild hair. Who else could I be talking about but Bobby Schneider? It was said he had five planets in Leo. I wouldn’t dispute that! He’d come over to the store every day and serenade me with his guitar and what he thought was a wonderful singing voice. Maybe it was, but I never got it. I was embarrassed by all this wooing, then I just got irritated. However, he did finally wear me down and I don’t know why, but I became his “old lady.” This created much talk and speculation in the production department!

At some point Ted left, to be replaced by John Ellis. John’s old lady, Cloud, was there all the time, doing what, I don’t know. As in the production part of the shop, there was a little loft in the retail store. Cloud hung out up there with Ginny, who was this fantastic, very ethereal seamstress. She had a little set-up up there, doing her own sewing, making all manner of beautiful hippie garb for her own business. She may have sold her stuff from the store, but I don’t recall. John was a rather imposing person and I don’t have the best memories of him, like the day I told him I didn’t feel too great due to cramps. He gave me a joint and told me to go out to the backyard and smoke it and I would feel better. Oh, jeez. I got strangely and ridiculously high… basically mentally paralyzed. When I could finally speak I asked him WTF? and he said it was laced with angel dust. Errrgggh!

Celebrities? There were a few, rendering me mute. Fuzzy memories, but it seems among those famed people were members of Fleetwood Mac (pre girls… it was the Peter Green era… wonderful blues), Sly Stone, Leon Russell with Joe Cocker’s Mad Dogs & Englishmen, and Santana. No Rolling Stones though, and I spent most of my retail days dreaming the Stones would just pop in. Didn’t happen.

My time at the store was about 3-6 months (my retail skills never improved), after which I crashed briefly with Weber ( a future EW production manager) and his old lady, Carole Schuss, on their Gate 5 houseboat in Sausalito, then moved in with Bobby who lived with George Golub (future EW sales manager) and Laura in a Victorian flat on 15th Street (SF). Julie, Norman’s ex old-lady also lived there for a while in a tiny room with her and Norman’s 2-year-old son, Dja. She kept totally to herself. Paula (also a future East Wester) and her old man, Igny, lived downstairs in the basement flat. The old Dutch Embassy. It is still there looking the same with the flag pole out front (at least it was the last time I drove by). I then moved up to Rainbow, Oregon to a little compound on the river with Bobby, Rick (wonderful guy who had MS and eventually died of it), and Guy Fritzlan and his old lady, Robyn. Then that all fell apart. I hitched a ride back to SF and started working on Folsom Street, circa 1972-ish. End of foggy memories from foggy San Francisco. It’s very different here now … the ultimate understatement. The shop and store are now (and have been for years) a garden shop, and the interior is much the same… the facade, stairs, lofts, wood plank floors…