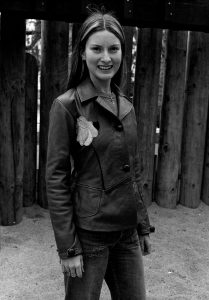 I was 15 in 1965 and hanging out everyday at the beach in Florida. It was great fun, surfing and going to weekend dances.

My boyfriend turned 18 that year and went to New Orleans instead of school. In his letter to me he said “I got my butt drafted”.  It was to be a long time before I saw him again. He got shot and was in the hospital in Saigon for 9 mos.  We wrote regularly. In the meantime, 2 guys I knew enlisted and were killed. We had a ceremony at the football game halftime and the principal gave their families flags.  Country Joe and the Fish’s line in the song “Be the First One On the block to Have your Boyfriend Come Home In a Box” still gets to me. I was so thankful my boyfriend lived and came home.

In 1968 I came to S.F. to see the Haight Ashbury. WOW !!  San Francisco was everything I could have imagined.  I loved it !! I decided not to return to Florida and college, much to my parents chagrin.  My Dad was an aerospace engineer in Huntsville, Alabama, and my Mom was a dental hygienist.  They had they planned on college for my future.  I was 18!!!  Whoopee!! I hung out, went to concerts- Fillmore West, Avalon Ballroom, Winterland, Goldengate Park.  I met a new boyfriend and on my 19th birthday walked into East West to ask for a job. I met Norman and he hired me immediately. I was wearing a pair of leather pants I had made while I was living in Big Sur!!

Working at EW was everything I could have dreamed about of in a job!! The boss had a ponytail down past his waist, let us play loud music and even smoke pot in the backyard of our little shop on Castro St.  We all bonded and became a family. There is a picture of all of us in that backyard, Young and beautiful!!  I am still very close to many today, 2016!  We expanded and moved from the little shop on Castro to “The Factory” and continued to produce award winning designs in leather clothing. All the Rock Stars bought our clothes and we all wore them, too.  We had shows in NY that were jam packed!  WE WERE STARS!! Webb and Tony were our leaders and Norman was our genius designer!