A Lament for Sandy Laughlin by 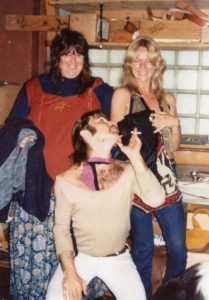 And again….”One at a time”….as my friend Janis concluded in her email to me yesterday, telling me that our old friend Sandy Laughlin, from the long ago East West times in San Francisco, had died. I’d been thinking of her lately because in my never-ending quest to sort my life, I ran into a stack of photos that were left out of an album from one of Emily and my trips to the coast. I scanned a few of them and passed them along to a couple of friends. There were a couple of pictures of Sandy at a party with some of the old crowd. Now, I don’t know whether or not this prompted Carole and Janis to investigate Sandy’s whereabouts via the Internet. Many of us had tried to get ahold of her in the past….to no avail…like that lost classmate they try to locate for the class reunion. I hadn’t given it, or her, much thought for a long time. Could be a coincidence…probably is…or maybe not. I sent the images on March 15th. Her obituary says she died on March 28th. Sandy was clever, crafty, and had a great sense of humor…wouldn’t surprise me at all if she decided to glide about our collective sub consciousness to stir up a little mischief…to gently tap Carole and Janis in the head and prompt them to think of her and try to find out what she might be up to. Well, now we know what she’s up to…or not up to as the case may be.  This photograph was taken at Sandy’s apartment in San Francisco. It was the last time I ever saw her. She cooked a lovely dinner and introduced us to her big, old fluffy cat and gave Emily a doll. She showed us some of her lovely works of art. She was always generous and full of good ideas and she filled the background with her warm and gentle laughter. I wish she could have been found when she was still alive, but she had many health issues I think….maybe she didn’t want to be found….until now. I miss you, Sandy…the day to day Sandy…working in that… magic to many… weird and wonderful factory we inhabited …back then.   “One at a time”, as Janis said…and that cast of characters is falling away at an uncomfortable rate…ulp. It was like a tapestry….a rich tapestry of interesting misfits (mostly) who fit together beautifully for a short time, had a wonderful time, and seem to be running out of time. It’s not quite threadbare, yet, this tapestry….but it’s getting a little worn…like the Indian bedspreads that hung from the factory windows….