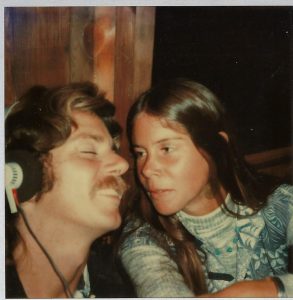 There are probably very few of you who know me.  My involvement with East West Musical Instruments Co. began in a very round about way.  Brian Daniells was my introduction into your world.  Brian and I had been friends since we were kids.  He grew up in Palau, Micronesia but his grandmother lived just down the street from me in La Selva Beach.  Brian and I had a small custom leather business in Aptos.  Brian then moved to San Francisco to go to college.  He then became an employee of East West.  As time went on, Norman, who is originally from Maui, bought some land on Maui.  Norman then subdivided a small portion of that land.  The Daniells family, the Vitarelli Family, Elizabeth Bronson and your very own David Warren formed a Hui and bought land from Norman.  Brian invited me to come visit him in his new Maui home.  Having been to Hawaii in 1965 I had been trying to get back.  Brian’s offer was heaven sent.  This was in early in the ’70’s.

I had been working at the Fibreglas Works in Santa Cruz as manager of the upholstery department, a position I inherited after Brian left for college in San Francisco.  Well, after a couple of years the Fiberglas Works went bankrupt, I went through a divorce and I crashed my beloved 1957 Porsche Speedster, all in a 4 month period.  Time for a change!

I moved to Maui.  After 6 months of making chamois bikini’s I needed more employment.  Some of Brian’s family was working for Norman on construction projects he was doing in the early stages of developing his new homestead on Maui.  I asked if there was any possibility of getting a job with Norman.  There was, and now I was in, however, in a construction mode.  Norman would come to Maui to design and develop his land.  I worked with him in the development process and we built his dream and a relationship.

Fast forward about a year, Norman is in the middle of a design session and the person who had been making his master patterns left, leaving him in a position he didn’t wish to be in.  Norman could make patterns, but he was busy elsewhere.  He was designing, developing his land and generally taking care of business.  I mentioned to him that I was capable of making patterns since that is what I went to school for and practiced in Brian Daniels’ and my custom leather business.

Norman took the bait and I was in AGAIN!!  Actually, it was something I was very comfortable with and enjoyed doing.  So now, I functioned as Master Pattern maker, care taker and general construction laborer.  My East West involvement was Maui oriented in the design phase and I only visited the factory one time, but over the years I learned of some of you through Norman and Tony.  Mara came to Maui a number of times to sew our prototypes and through conversation with her I learned of you.

I cherish being part of the tribe!  I feel very fortunate to have been a part of the process.  I was able to see how it all began.  Picture this:  Norman under a eucalyptus tree, eyes closed.  Is he sleeping?  Is he dreaming?  ( mushrooms were plentiful in those times), then the hand starts drawing on a piece of paper.  Later that piece of paper becomes my afternoon’s work.  I transposed that 4” X 6” sketch into a working prototype pattern.  Then that pattern went to, first Bill McLellan and then later to Mara who would then sew up the prototype.  Norman would then take our output of prototypes back to San Francisco and I believe you know the rest.

Now it seems, there is interest in East West Musical Instruments again.  Oh Boy!!  Hang on, it could be quite a ride.