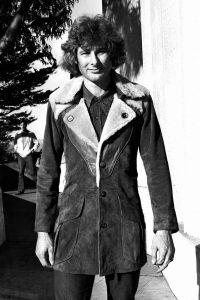 I was born in 1940 in England during the blitz in a bomb shelter during an  air raid. I had to sleep in a cage, to keep debris off me in case a bomb hit our house.

Even today, I flinch when a plane flies too low overhead, subconciously thinking its a German bomber looking to kill me.  Some things never get erased out of our formulative brains at an early age, I am told.  Maybe this explains my offbeat personality.

I ended up in California, as my father was an aeronautical engineer working at Lockheed in Los Angeles.

My attraction to leather was fueled by my family always having horses. Leather is an important part of the horse world.Saddles, chaps, reins, etc.

I became an expert rider and was a horse wrangler working for a ranch in Ojai I still love horses and dogs.. I never met a dog I didnt like, nor a horse I couldnt ride.

One day I decided to go to college, got accepted at San Francisco State, enrolled,and immediately became a hippie and dropped out. Sex and drugs and Rock n Roll. You know the story. I then went to work for UPS, and saved a goodly amount of money. From there I went to Santa Barbara and opened up a small retail store. I mean SMALL, 225 square feet.

Somehow the very first East West catalog came into my hands.I was immediately attracted to its vibe, and went up to see Norman on Castro street.  We connected immediately, and I started to sell a lot of jackets in my store.

In collusion with Norman, we opened up a bigger store called “Down Home” on the main street of town selling only East West garments. These were really good times. We were right in the middle of the suburban social revolution of hippiedom. Everything was fun. Jimi Hendrix said it all. Then one day, Norman recruited me to come and work at East West in San Francisco in a managerial position. I think I fit in because I was a cowboy, not a dreaded “business’ person I think he wanted to go back to Maui, and left the company in my hands. Everything went well, we grew and made money. East West was a beautiful mix of beautiful people. Most were artists in their own right.

Were were superstars in the garment business and in alternative lifestyle leather garments. We were famous and loved it. None of this could have happened without the free spirited people that made the East West clothing.

I have nothing but fond memories of the East West experience. So much went down over the years it would fill a book, but it was a once in a lifetime experience, and I still think of it often.